Note: This document is a draft that will evolve over the next months. Please feel free to contact the editor if you have further details, corrections and/or want to contribute improving it.

This document aims to address the web origin issues implementers should take into account and the options to get around them.

It is important to note that the issues discussed in this document are not hypothetical, they are reproducible with existing commercial EPUB3 publications, and raise security as well as authoring concerns.

What is the Web Origin Concept?

In practice, this translates into the same-origin policy, which is a critical mechanism at the core of the Web Security Model. This model applies to browsers and web views for example.

With EPUB, the problem is that the Reading System itself must set the origin of content, which can completely break the same-origin policy and authors’ expectations when using a JavaScript API for instance.

An origin is the following tuple:

If we apply the same origin policy, we will get the following:

In this last example, we can already foresee the potential issues a Reading System will have to handle, as two different publications are sharing the same origin and will consequently be allowed to interact freely with one another – instead of being isolated.

Serving Contents in the App Context

Each method comes with pros and cons, and it is certainly not trivial to get around some issues they might create.

When serving static files with the non-network file:/// scheme, Reading Systems can’t rely on interoperability any longer as different platforms have made different choices.

In the URL Living Standard, file is indeed underspecified:

Unfortunate as it is, this is left as an exercise to the reader. When in doubt, return a new opaque origin.

Although the origin of contents seems to be defined as opaque – serialized as null – in most if not all user agents, they don’t apply the same restrictions: some User Agents may simply isolate iframe, they could also be blocking fetch requests, others may disable or scope Web Storage in very weird ways, and so forth. (see WHATWG issue)

Options -> load base64 with base URL?

Running a local server seems like one of the most – if not the most – popular method to serve EPUB contents currently, which also means EPUB3 publications share the same origin.

This already create some issues. If we take Web Storage for instance (let’s call it “App Database” as it also applies to IndexedDB), we can see all publications in the library share the same origin. 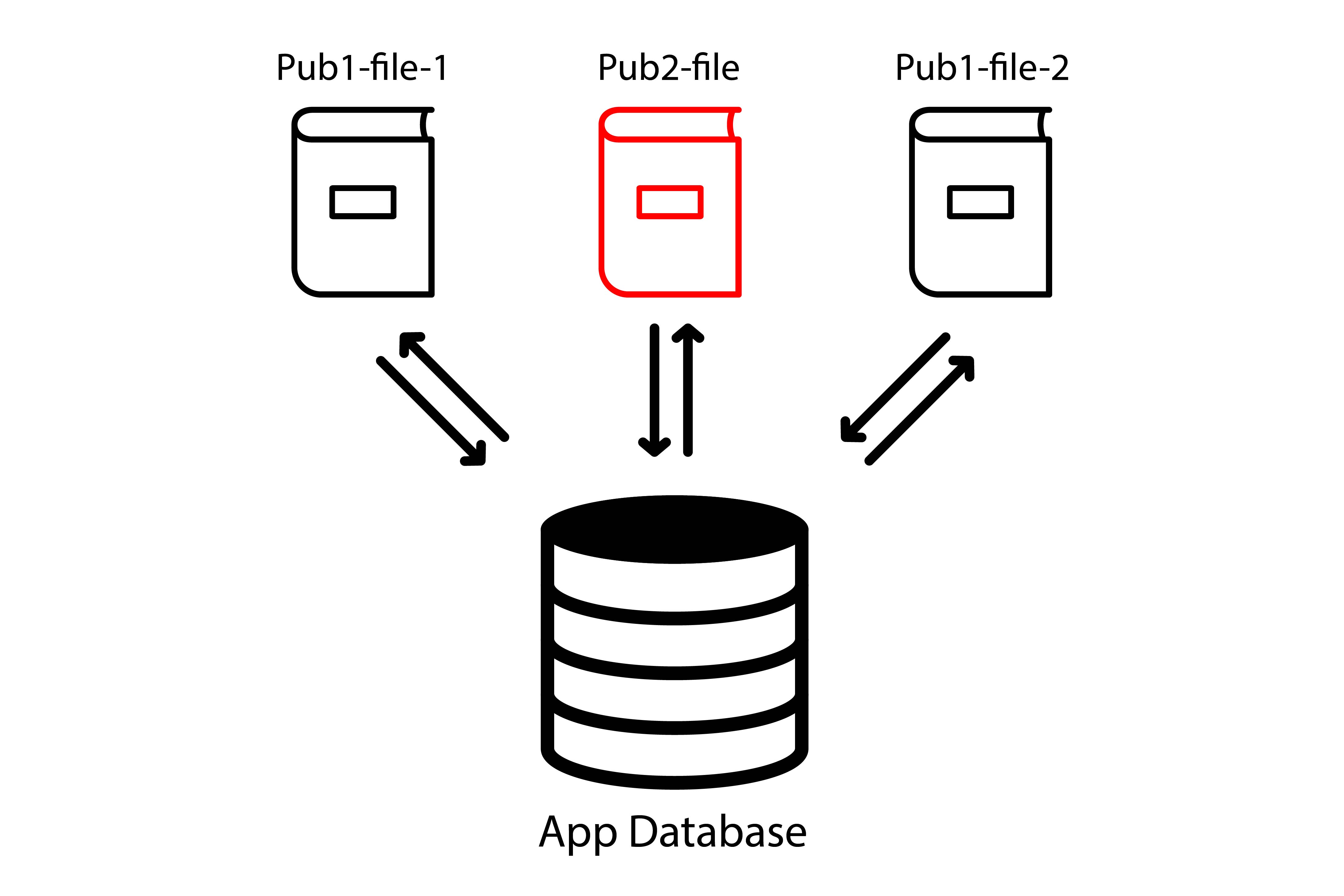 As an example, it means that everything an author programmatically stores using JavaScript will be accessible in another publication, possibly by another author. This obviously raises security and authoring concerns.

While developers might be used to desktop platforms making it impossible to run two servers on the same port concurrently, this rule is not enforced by at least some mobile platforms (Android and iOS) as long as only one app using this server is running in the foreground – as soon as you try to run two side by side, then one will simply crash.

In practice, this is what happens: 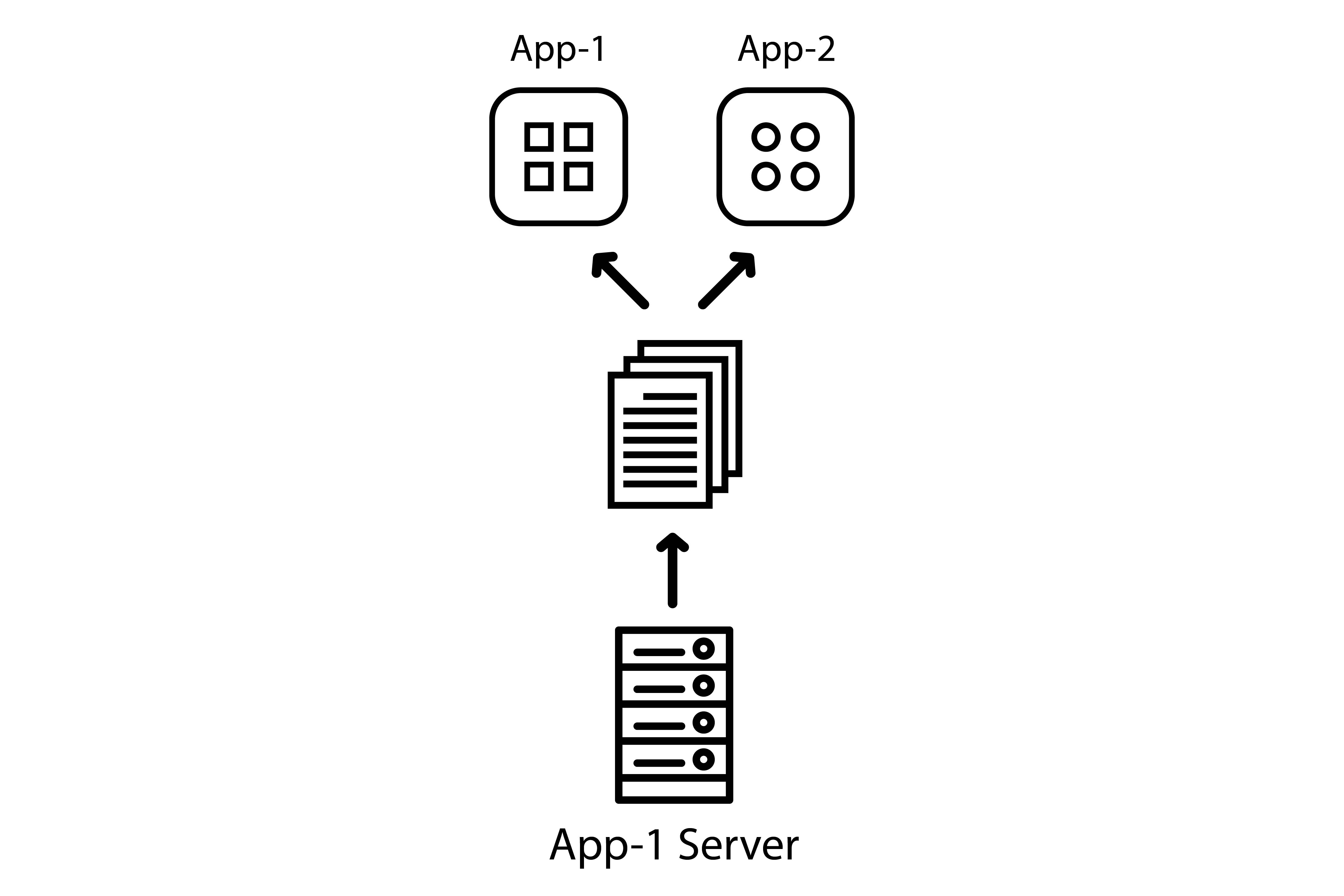 Once again, this is not an hypothetical issue, it is reproducible with existing Reading Apps. This issue was discovered during manual testing, verified and cross-checked (see this Ionic issue for example). 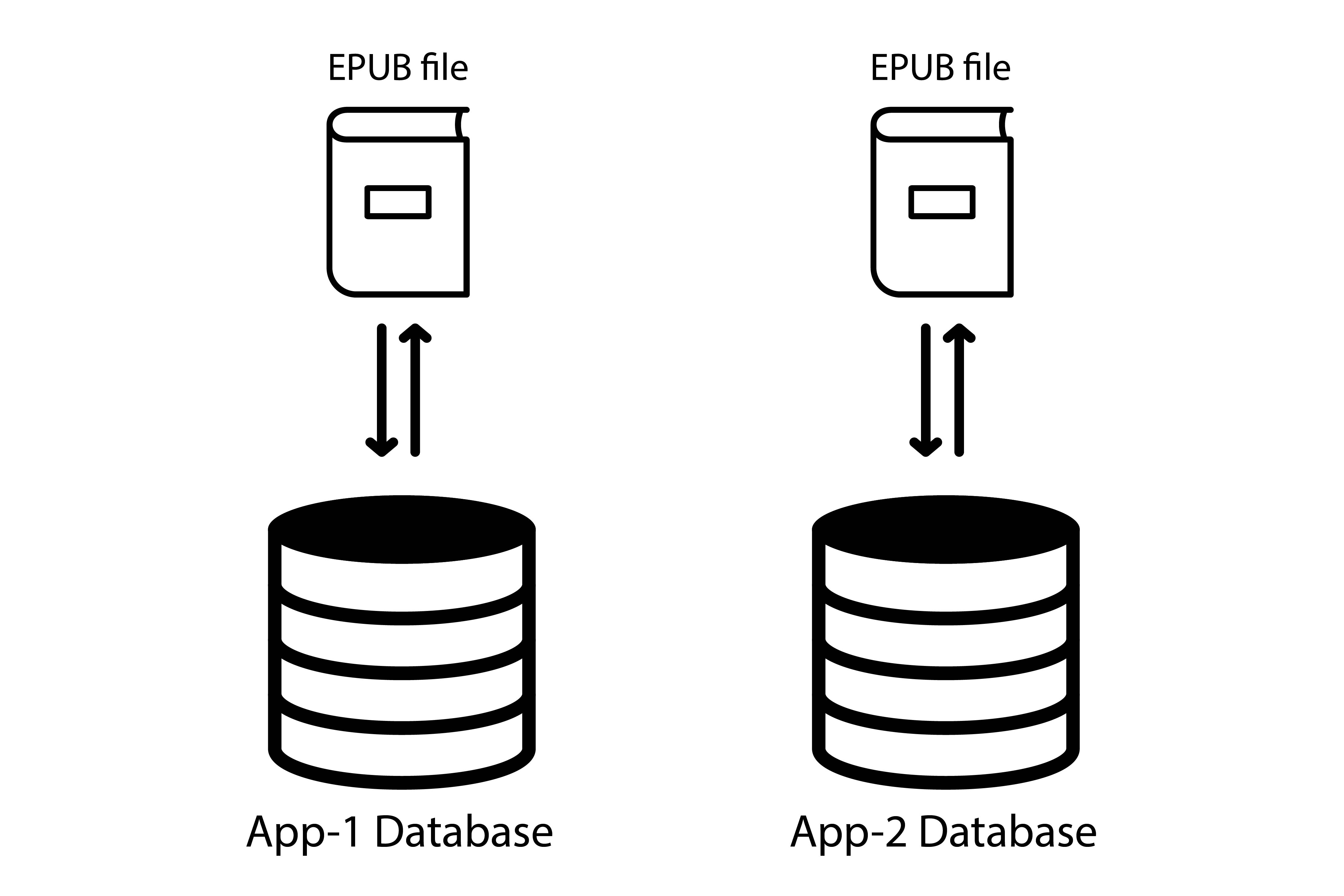 Which means an author can not access and retrieve data stored via JavaScript in another app.

To get around those issues, a lot of Reading Systems are using a random port to make sure any other app doesn’t launch a local server with the same they are using. 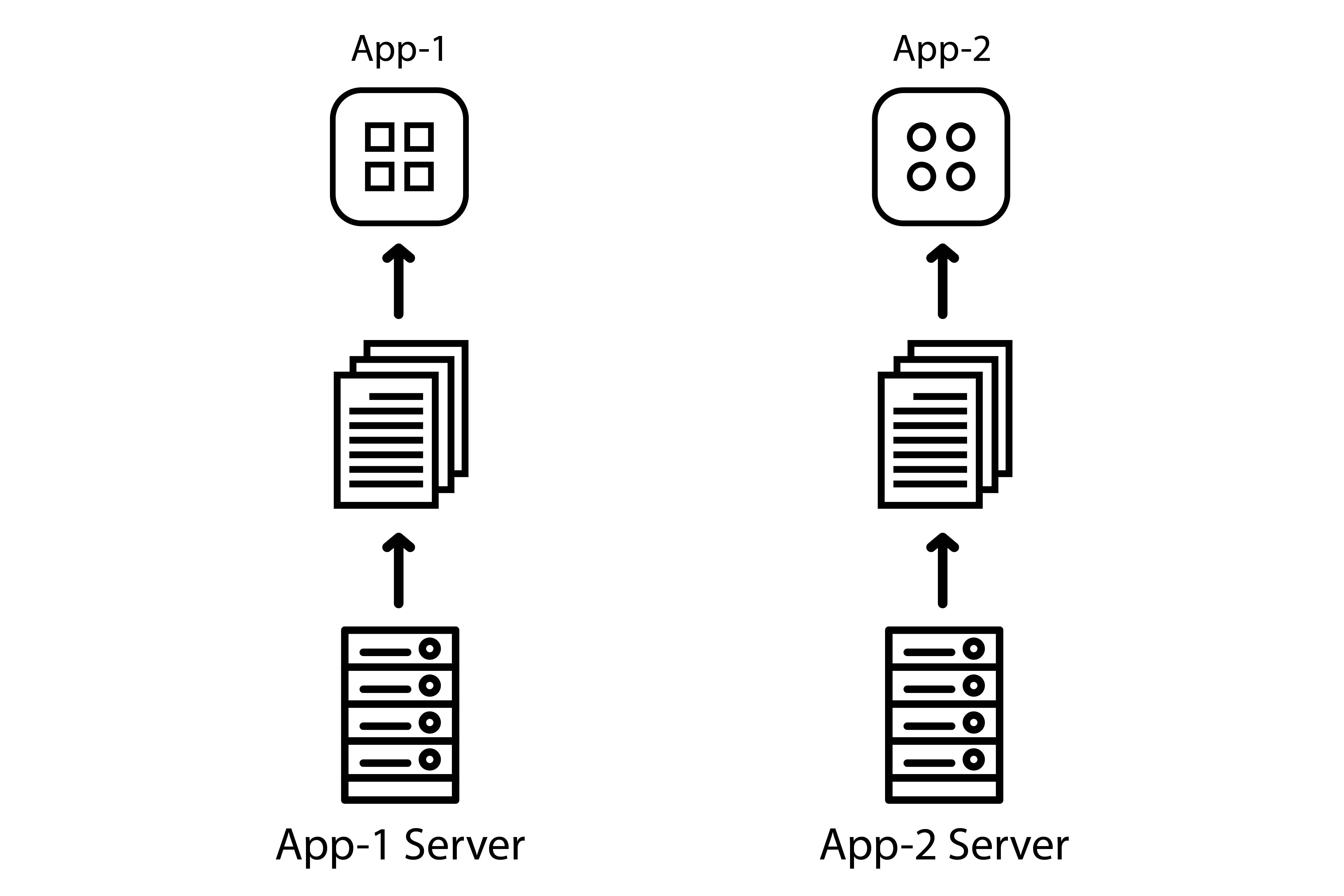 However, it effectively makes the database non-persistent as the origin may well change at some point. 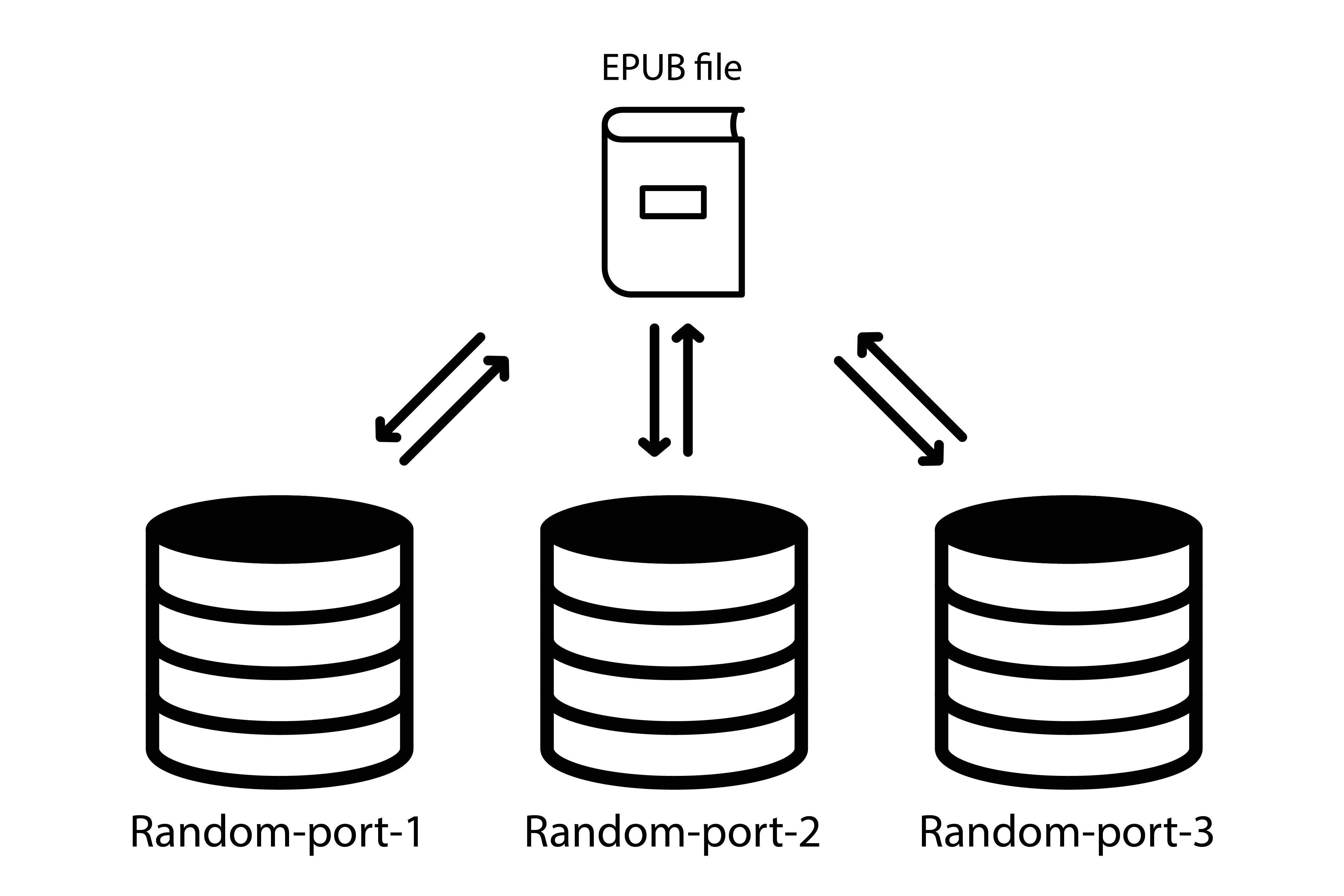 In practice, using a random port impacts some APIs like Web Storage and possibly others, which raises authoring concerns.

This is one of the reasons why a handful of Reading Systems have switched to a custom scheme.

Serving Contents in the Web Context

Cloud readers is quite another issue as all publications will usually be served on the same origin, the Reading System’s.

This is a problem that could eventually be solved by the suborigins specification, which defines a mechanism for programmatically defining origins to isolate different applications running in the same physical origin.

As it allows a server to specify a namespace on a resource response which is paired with the scheme/host/port origin tuple, it could also be used to define origins isolating different publications served in the Reading System’s origin.

Currently, the only options to protect against attacks (see “Security Concerns” section) are:

One should note that if a cloud reader aims to support JavaScript, all publications will at least share the same database, which means it is possible for an author to access data that originated in a different publication.

Unfortunately, suborigins is the missing piece of this cloud reader puzzle, suborigins being an attempt to fill some of the gaps from the other policies.

First things first, origin is a security consideration in the EPUB specification.

The following recommendations are provided as a guide:

Reading Systems need to behave as if a unique domain were allocated to each Content Document, as browser-based security relies heavily on document URLs and domains.

Reading Systems that do allow data to be stored have to ensure that it is not made available to other unrelated documents (e.g., ones that could have been spoofed). In particular, checking for a matching document identifier (or similar metadata) is not a valid method to control access to persistent data.

Reading Systems that allow local storage also need to provide methods for users to inspect, disable, or delete that data. The data needs to be destroyed if the corresponding EPUB Publication is deleted.

From the EPUB security considerations again, the following needs to be considered:

It is obviously non-advisable to store sensitive data (e.g. identifiers, passwords, API keys, etc.) client-side using JavaScript for instance, but that can happen. And reading/activity progress, education contents, reader preferences, etc. can also be considered sensitive data to some extent. If all documents share the same database, this is a significant privacy issue.

Let’s focus on the “database use case” for the moment, as we’ve been using this one in this document. There are various reasons why authors may want to store data and retrieve it at a later time:

If all publications share a common database, there is a potential risk of data collision e.g. concurrent access to same-name properties in a localStorage object, total reset because of localStorage.clear(), etc.

This is not a hypothetical problem. The issue is reproducible with existing commercial fixed-layout EPUB3 publications, and it may also exist with complex reflowable documents (such as in the education sector).

A likely scenario is that users would acquire and read several publications from the same publisher, in which case the probability of data collision is high; authors are not even supposed to encounter those issues and won’t consequently prefix their keys, protect their scripts against restrictions or quotas – which can be as low as 2MB –, etc.

Besides, a random port effectively makes such data temporary. User data can suddenly vanish, which raises user concerns too.

First and foremost, this is about trust: users’ privacy is an important aspect of this issue.

In addition, UX issues may arise: users might be forced to re-enter their name at the begining of an interactive book, their “read aloud to me” preference might be lost in their favourite audio book, or their dyslexia-specific settings might be reset.

Do we want to set best practices for re-using EPUB contents in the “native” UI? e.g. consider they are opaque origin and should be handled with great care – sanitization, etc.

All icons used in figures from The Noun Project under a CC-BY license.